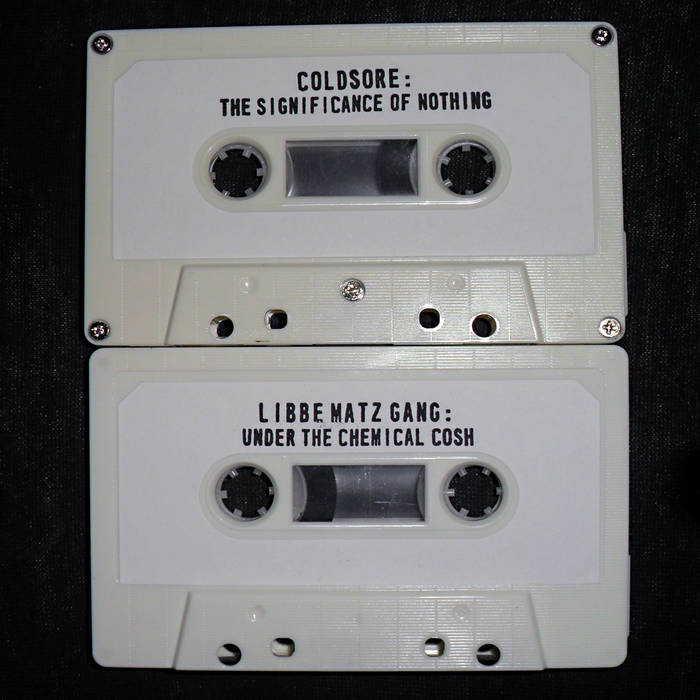 In our own words:

LMG - still hanging on out of pure spite, Q3 2015.
Pacific Trash Vortex = Island home for California spectres.
Manipulator / Adaptor / Pacifier
For the Bullwood Hall kids.
Thanks to Coldsore for sharing the virus.
youtu.be/AU3oZoYgYnE

COLDSORE - handmade trash electronics / doomdrones from the depths of soon to be cut down forests / nightmares of the concrete jungle / ashes of molten-down motherboards / acrid smoke darkens the burning skies / toxic gold teeth harvest in former diamond mines turned wastelands / thanks to L.M.G. for struggling with us.
www.coldsore.cf

Libbe Matz Gang's “Under the Chemical Cosh” opens with what I imagine the traffic in Ballard's Concrete island sounded like – Bedford vans and 1970's arctic-trucks slowly circling some sunken roundabout, exhaust-pipes flanged into a hyperimagined rumble-drone heard from, I dunno, inside a drainage conduit or underpass but ////let's stop this metaphor before it goes all Mark Fisher; though I do remember a friend in a barge bunk-bed, late summer, 1980, sing-speaking “There's no one driving...” in his sleep: John Foxx lyrics inserted into 3am somnambulic mumble; it was funny-but-fucking-freaky; thoughts surfacing, an anxiety-dream colliding with a song-lyric and oozing out into the world like cotton-wool ectoplasm hanging from the mouth of a bogus Edwardian spiritualist//// but, of course, LMG's music sounds absofuckingnothing like traffic whatsoever – I'm just projecting; everything reminds you of something else, right? – it's a throaty FX-laden pad, not 70's traffic, not a roundabout on the M23 that you're trying to hitch from (a rusty white van turns up, the doors open and ) – but it goes roundandround slowly in the mix – roundandround inside your head like a bad small-hours negative-thought-loop that won't go away until

At around 4 minutes, fluttering wings of treble enter the mix and you think it's gonna turn into hi-hats – like, here come the drums – but the reverse happens: the bass-drone recedes, like traffic-noise at night or a dream or a perceived threat, leaving muted flutterings – insect-wings heard on an old transistor radio; a drug-numbed tongue trying to speak – I remember what constituted so-called 'anti-depressants' in the late-70s; they were filthy fucking horrible drugs, barbiturate-like emotion-flatteners that left you low and dry, spittle-less, impotent, constipated, watching the world through a thick-bottomed brown Mackinsons bottle, a telescope the wrong-way-round, its lens covered in rancid butter everything reminds you of something else synth-modulations come and go, try and take hold, stick to something, but never quite grip – sounds / words / thoughts / emotions that can't quite surface.

8 minutes in, something truly awful arrives: a demonic bad-thought-voice clawing its way thru the cellars of your mind, switching lights on and off, pulling the drawers out of yr furniture, searching for something horrible, something you meant to lose; a memory you don't fucking want to have. The oscillations grow progressively nastier, more unpleasant, more fuzzy and furred up – taloned thought-forms scratching at your brain from within, their claws clogged with cobwebs, sharp/but/soft.

Coldsore's “The Significance of Nothing” starts all creamy, drifty, slide-y sinewaves – an ECG that turns into a slow-motion air-raid siren. Hints of early Tangerine Dream (Alpha Centauri-ish era? Atem?). Someone's reading your thoughts. They've got a machine that's teaching itself to do that. A voice, possibly imagined, low in the mix – your conscience, guilt, mother, a hypermediated world? - who knows, but something “is no longer available.” The tones flatten, shift to a lower register, become more 'machine'-like; they pulse, shift, whirr, move up and down relative to one another – not noisy, not nasty, but there's a vague sense of unease in the air and I find myself worrying, “Who is tending to them, these devices and gadgets? Who is in charge here?” Aircraft pass overhead – there's a threat of war – but it never quite materialises (symptoms of mediated 'fear' in a post-millennial world: there's always another 'war', another 'threat', another symptomless 'panic'; we live in a state of constant low-level anxiety – chimeric threat near-manifestation – the news-cycle lock-stepped with the frequencies of fear. Talk-show indoctrination; the right way to think. It's not that the world is too fast – it's too... wrong. Media spits out mixed messages, uneasy narrative u-turns, propaganda-as-neural-aggitator, sewing the seeds of confusion. RightSpeak, ReWrite, WrongRead, DoubleTalk, HorrorHorrorHorror. Some of us handle it better than others). At 11 minutes in, a voice croaks a complaint / moan of pain / request for medication. It sounds like Allen Ginsberg with terminal throat cancer, a street-drinker reaching out, reaching upwards from the shadows, hand outstretched, towards you. A cracked-voice plea fallen on deaf ears. Lifts move up and down shafts, infrastructure hums, a woman tells us she “wants it to stop.”

But it never does."

"Themed around the medical treatment of juvenile delinquents these two artists share a side each on this gnarly tape, presenting some dark electronic meditations on sinister control and repression mechanisms through medication.

The only vocals evident are disturbingly delayed speech lifted from instructional tapes (?) discussing amongst other things Largactyl or Chlorpromazine – anti-psychotic medication with the ability to flatten and pacify with some unpleasant side effects: drooling stiffness and involuntary movements, commonly used to treat psychosis it was / is used in prisons to control aggression.

Libbe Matz Gang’s, ‘Under the Chemical Cosh’ makes explicit its theme as a bruised and persistent sustained tone deviates into the spiked and poisonous sting of a scorpion, crackling with ill intent.

We have moved from the cold-sweat-dread of a general anaesthetic administered by faceless medics with dead eyes and ended up at the wrong end of a sterile corridor in a Dead Ringers style body horror. The high-pitched whine that closes the storm is what you hear as the anaesthetic wears off – you wake alone in surgical gown, slowly sitting up to take-in your grotesquely transformed reflection.

Cold Sore’s track is a grey and eerie bombed-out fug of barbiturate hangover. ‘The Significance of Nothing’ limps into existence as a drowned air-raid alarm sounds forlornly while an impassive female voice rises from the murk, looping in sad resignation.

While the Libbe Matz Gang track seems to represent the panic and terror of a young person in over their head, no longer in control of their actions, the Cold Sore track is the cold sedation of a forced intramuscular injection. Like being dropped into a restless sleep from which you may never wake.

You are alone, you don’t know where you are, who these people are or what they want."