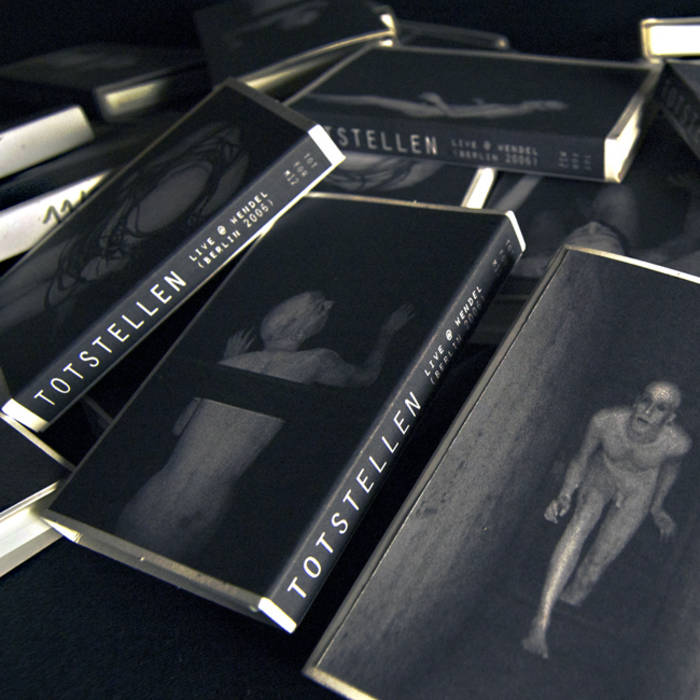 released by totes format as a white C-22 cassette in cardboard case, each with one of 11 different coverdesigns. limited to 25 (handnumbered) copies.

an archive live-recording from 2006, based on the material from the TUNNEL BRUECKE audio/video-installation accompanied with a selfbuild string instrument, played with a handdrill. the instrument has been build from found material of the same location as the sound sources: the tunnel-like insides of a motorwaybridge crossing river elbe.

VITAL WEEKLY 870
On the live cassette, recorded in 2006 (so why wait all those years to release it I wondered), Totstellen uses his field recordings material from 'Tunnel Bruecke' (see Vital Weekly 614) and adds to 'a self build string instrument, played with a hand drill'. This leads to some particular grim material. Again not the most noisy stuff around, but with the rumbles inside a tunnel, the perfect soundtrack to all things claustrophobic. Recorded with what seems a hand held recorder which adds once again, furthermore to the 'direct in y'r face' quality of the music. A fine combination of computerized electronics and hand cranked noise. (VITAL WEEKLY 870 / FdW)

On Live @ Wendel Totstellen manipulates sounds he recorded under [and inside] a motorway bridge going over the Elbe whilst playing a homemade stringed instrument with a drill. Not only does it sound good but the images accompanying it are remarkable too; a gaunt baldheaded chap, knacker bare, covered in white paint wandering around Ballardian landscapes like a cross between Blixa Bargeld and Nosferatu. This is all part of a video installation complete with the monotonous roar of traffic, clanging riveted substructure and a processed drilling sound that's the roadside equivalent of facing a dentists drill. Its a creepy listen which compliments the artwork no end. But perhaps the most remarkable release of them all is Komamachine. Sampling dialogue and music from the Quay Brothers film ‘Institute Benjaminata’ this is a chilling and eerie ride into queasy dark ambient territory courtesy of some fine moaning from manacled lost souls and the creaking of leather straps [I’ve not seen the film but I intend to, anything that gets compared to Eraserhead goes down on the to do pile round here] chuck in some sorrowful viola, throbbing industrialania and you have something that would bare comparison to Gavin Bryars ‘Sinking of the Titanic’ writ large on a screen of David Lynchian making. Having watched the Tunnel/Brucke video on the Totstellen website I urge you to do the same. This is urban exploring with a wider remit. This is trying to make sense of your urban surroundings through sound and imagery. (IDWAL FISHER / m.w.)