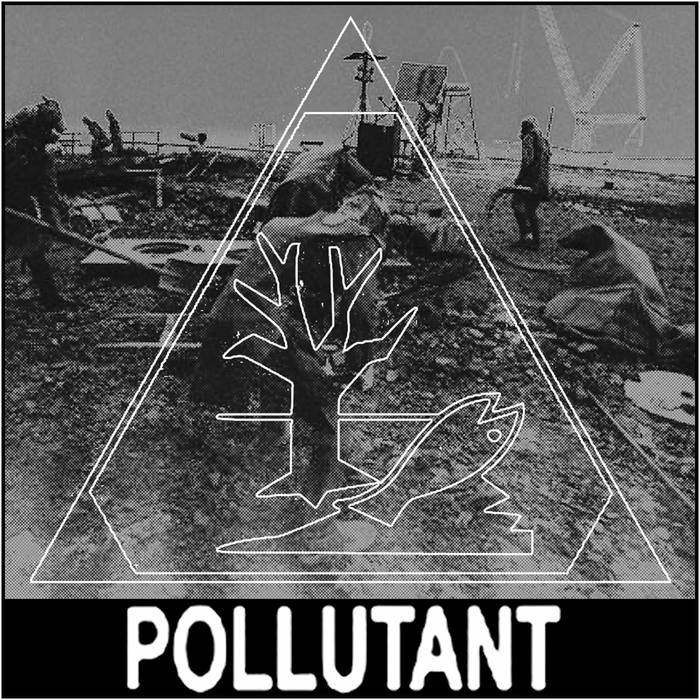 Recorded in 2016, while digging out from the ruins of TEPCO's Daiichi NPP. We hear the sounds from under the debis inside the slowly collapsing sarcophagus containing reactor 4. COLDSORE uses mostly handmade electronic equipment: Soundgenerators and -deformers powered by disastrous memories of the future and dirty electricity.

While the state of finland and their affiliates are actively building and defending the construction of new nuclear powerplants and a terminal nuclear waste deposit, today's flora and fauna is still very radiated by the fall-out from past achievements.

While the highly radioactive artifacts of looted shinto shrines make good dollars in online marketplaces, tradition and government is still in business.

While we have been beaten, shot and imprisoned for resisting the repetition of old mistakes, the people of the future call for more disasters and concrete solutions.

While the matsutake mushroom grows in finnish fall-out areas, it is still exported to japan's gourmet markets, as the harvests in forests around hiroshima have weakened.

While the honor-medals of the liquidators gather dust in the attics of the deceased, THE ZONE is the cause of lucid touristic dreams and territorial playground of SONY entertainment platforms.

While the japanese dogs hunt pigs in abandoned supermarkets, macrobiotics become a curseword in the european healthfood sector.


"In Vital Weekly 1044 I first came across the music of Coldsore, which is the same guy as Totstellen and GRMMSK and here we have something political again, as the music deals with environmental
pollution. The first edition apparently contained toxic materials, but the one I have here is a regular edition. It says on the cover: "recorded in 2016, while digging out from the ruins of TEPCO's Daiichi NPP. We hear the sounds from under the debris inside the slowly collapsing sarcophagus containing reactor 4. COLDSORE uses mostly handmade electronic equipment: sound generators and -deformers powered by disastrous memories of the future and dirty electricity", so you never know what is really true about such things, but I am sure there is a genuine concern here. In the pieces they use cold synth bleeps, airy electronics and sometimes a bit of voices, all to mark off a sense of a post nuclear landscape, via some nicely primitive ambient industrial music. Music, in general, which slowly builds up with some shimmering frequencies to make up a sense of violence and treat.
I say 'primitive' to indicate the kind of instruments they are using here. I would think much of this comes through a bunch of humming monotrons and a couple of stomp boxes, plus perhaps a 2-bit
sampler, older than the current owner and full of dust; all neatly taped on a cassette for that extra layer of roughness, which is not lost in translation back to the CDR. The website mentions this as
fifty-minute tape, but I have here a sixty-three minute CDR; the final piece being a twenty-two minute live recording at the Anarchist Black Cross in Helsinki, in which everything goes up a bit and the group/project sounds a tad more industrial. This is surely a sonic wake-up call." (FdW / Vital Weekly069)

"…..of people not inter-networking - so this is brought to my attention: POLLUTANT by COLDSORE……….. but WE’VE HAD QUITE ENOUGH DRONEINDUSTRIALTORTUREELECTRONICS! Have we? It’s possible. How much great music is there to be discovered? Stupid question. On my death bed, I’ll wonder what I missed. No I won’t. I’ll be thinking of other things. So here’s this noise. From Finland. It doesn’t matter where it’s from. From The Zone? It’s no picnic, roadside or otherwise. It’s post-future, neo-sci-fi, after industrial or right now in the ruins/ construction site of something……..Russian voices…English voices…your brain’s bombed by radiation………a sound generator turns the world negative…….blackest black/grey tones…gun shots in the echo chamber? It’s unclear…as opposed to total noise assault, an attack of sustained tones and drones……….black hole electronics……….charred electroacoustics……." (Include Me Out includemeout2.blogspot.com/2016/10/no-way-out-coldsore-libbe-matz-gang.html)

"[...] Coldsore appear twice each time creating dark and foreboding atmospheres that focus on both depression and pollution. On the Libbe Matz Gang split ‘0+0=0’ there’s mention of Largactyl and a quote by Wittgenstein and it is of course suitably wrist slitting. Pollutant’s four tracks contain various synth atmospheres accompanied by sampled dialogue, the odd disguised PE vocal and air raid sirens all leading me to think that these tracks were recorded by someone who hadn’t been listening to disco for a while. Depressing, sombre works no doubt recorded in the depths of a Finnish winter at three in the morning. [...]" (Idwal Fisher)

Please also read about the STRUGGLE against the construction of new NPPs in finland here: fennovoima.no.com/en/