SOLIDARITY IS OUR WEAPON AGAINST ALL PRISONS 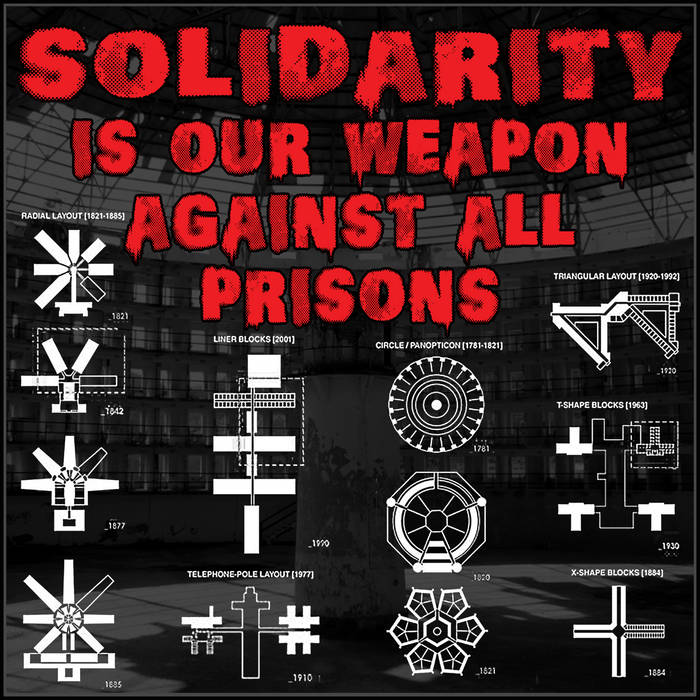 TOTES FORMAT has been gathering a bunch of artist and projects from different sectors of the experimental music spectrum to take a united stand against all forms of systematic repression of anarchist and antifascist actions. The profit of this compilation will go to the ANARCHIST BLACK CROSS in Helsinki. Thanks to all contributors and spreaders.
Solidarity is our weapon!
totes-format.tk

ABC Helsinki was founded in August 2012 to fill the need for long-term prisoner support and to get internationally networked. Our most common ways of action are spreading the information, collecting funds and getting lawyers for prisoners all around the world. Analyzing and criticizing the prison system and the society surrounding it is part of our field, too.

We support all anti-authoritarians, and their supporters, who are persecuted due to their political activities or acts which do not contradict with the ideal of anarchism. Whenever possible, we support prisoners who became anti- authoritarians during their sentences - so-called "social prisoners" who were forced to break laws for subsistence, or fighting against the despotism of the ruling class - and prisoners who fight against the prison-industrial complex from within. As anarchists we are against all prisons. We believe in direct action against capitalism and the State. We are not a human rights organization, since our goal is not to defend laws but to destroy them. In some cases we may support prisoners for purely humanitarian reasons. Different ABC groups decide their own policies independently.

The origin of Anarchist Black Cross dates back to late 19th century Russia, where revolutionaries started to help their comrades who were in trouble for actions against the Czar. In 1919 the group settled with the name Anarchist Black Cross. The prison and legal support activities spread around the Europe and Unites States with activists emigrating from Russia. All the ABC-groups disappeared from Russia as well from the other parts of Europe during the Second World War, but activity was revived with supporting opposers of the Franco regime in the 1960s.

There are many ways to participate in supporting the prisoners and taking down the prison system, from writing and translating the material to organizing support gigs, from painting banners to having performances. Even the smallest input can have a huge impact.

Dave Phillips: www.davephillips.ch
we must rapidly begin the shift from a "thing-oriented" society to a "being-oriented" society. to shape a new consciousness, one in which cooperation triumphs over domination, and humility before nature's complexity challenges technological hubris. to move on and leave the religious, materialist and supremacist phases behind us. most dimensions are yet to be explored. the real human potential has yet to be revealed. the process of liberation has only just begun.

Concrete/Field: concretefield.wordpress.com
A piece about the propagandists, hypocrites and liars spreading disinformation to forward their agendas of hate, division and greed.

Kek-W: www.kekw.org
Dmitry Pchelintsev was one of a handful of Russian anti-fascists kidnapped by FSB officers in Penza prior to Putin's staged re-election on March 18th. The men were brutally beaten and tortured until they 'confessed' to being part of a non-existent “terrorist community” that was planning to bomb the presidential election and the World Cup. It's total bullshit, of course. We can support Dmitry and his friends with tiny acts of solidarity and kindness. By remembering their names and condemning the crimes committed against them. By not allowing these prisoners to be forgotten or erased. By supporting the organisations that are seeking justice on their behalf. More info here: itsgoingdown.org/why-the-torture-cases-of-anarchists-in-russia-matters/

Nicolas Wiese: nicolaswiese.com
The original version of this electroacoustic piece was performed in July 2014 at Kunstraum D21, Leipzig, in relation to a spatial work by Chicago based artist / filmmaker Cauleen Smith. Both her installation and the sound piece have a direct reference to Sun Ra. The subtext of 'Versus/Nonversus' with its choice of quotations / speech samples, aims at the ambivalent relationship between Sun Ra's 'Afrofuturism' and the militant Black Power Movement. This version has been re-assembled and re-edited in early 2015, using parts of the performance's stereo room recording.

stapperton: soundcloud.com/stapperton
The first political prisoner I was made aware of was Leonard Peltier, imprisoned for a crime he didn't commit. He is still unjustly incarcerated at the hands of a federal government that continues to remain complicit in the manufacture of evidence and false testimony. As of the time of writing, he has been locked up for 15401 days, 9 hours and 30 minutes. I shall share a quote that resonates with my submission to the compilation form the man himself: "Silence, they say, is the voice of complicity. But silence is impossible. Silence screams. Silence is the message, just as doing nothing is an act"

David Wallraf: davidwallraf.wordpress.com
Noise and protest/unrest have an obvious connection, one produces the other. But the potential consequences of protest, punishment or imprisonment also relate to Noise as a genre: Harsh Noise Wall generates a form of isolation for the listener, a sonic simulacrum of jail. The track “dry wall” tries to bring these two sides together while maintaining a certain somber atmosphere that echoes and mourns the state of people locked away in prisons anywhere.

GX Jupiter-Larsen: jupitter-larsen.com
Back when I was a child, my father was very active in the labour movement. In all the strikes and protests I attended with him, the one song I heard most often was Solidarity Forever, as written by Ralph Chaplin.

GRMMSK: grmmsk.tk
i've been receiving my share of repression and state terror in all it's blossoming forms. from evictions to beatings. from court-trials to bank-account raids. from lost homes to imprisonment. i have seen my friends getting tortured in blockades and have been nursing them to recover from severe injuries caused by police brutality. for too long periods, i have been hiding from the military and the police. i suffer from PTSD and would not be able to survive without active solidarity. we are not alone.

SLEEPMASSK:
We are not resting in peace.

Trium Circulorum: triumcirculorum.net
My track picks up a topic within the realm of repression that is as old as mankind is: Torture. In all repressive systems in human history torture has been used to demoralize oppositional movements (among other self-justifying “purposes” like collecting information from people from oppositions or those close to them). I've cut 2 vocal samples against each other - Barack Obama saying that torturing people was a wrong thing to do after 9/11 versus the now president in office Donald Trump saying that “we should go for waterboarding and we should go tougher than waterboarding”. I won't comment further on these original excerpts from public speeches I've used here. They speak for themselves. Dark ages are not only rising, they're already devastating our world in full effect. Freedom and peace for all, now!

Days Of Eclipse: soundcloud.com/sacha_colgate
We fully support and endorse anyone fighting against oppression, and is working towards a truly fair and free planet. Organisations like Anarchist Black Cross Helsinki are fighting the good fight in often thankless circumstances, and often at risk to their personal liberty. With their sterling and tireless work, they are helping to build towards a better alternative society, which we hope will bear full fruit one day.

Subversive Intentions: subversiveintentions.wordpress.com
This is a piece I created a couple years ago to honor those fighting the Dakota Access Pipeline in the U.S. My project, Subversive Intentions, began as a means of unleashing my frustrations with American Politics and work out my own political thoughts and feelings which lean more radical/anarchist.

Zherbin: dmitrizherbin.bandcamp.com
The main loop of the track comes from sounds recorded at an anti-fascist march in Helsinki. It's not easy to address political and ideological issues through sound-based art without using words. Here's my attempt to make a direct connection between anti-fascist solidarity and an art form as abstract as experimental music.

tbc-czepoks: tbc-czepoks.bandcamp.com
Gustav Landauer was a german anarchist, jew, writer, theoretician and practitioner. He has been active in the Bayerische Räterepublik (English:Bavarian Soviet Republic) and has been murdered by the Reichswehr (English: Realm Defence).

Failed to Reach: failedtoreach.bandcamp.com
"Blades of grass have been found hanging in cells, covered with bruises, "apparent suicides." The guards say that the "GRASS IS UNAUTHORIZED." "DO NOT LET THE GRASS GROW". WE SAY, "DO NOT STEP ON THE GRASS." You can spy on the grass. You can lock up the grass. You can mow it down, temporarily, but you will never keep it from growing. Watch, the grass is beautiful. "
(No One Can Stop The Rain by Assata Shakur)

Das unpreetzise Klang-Labor: bit.ly/2q9uBhJ
in my youth it was said, that only somebody who moves feels their
shackles. but already since the beginning of the 80s this did not apply
anymore. now, everybody who doesn't function in the interest of capitalism feels them.

AUS TEARS: austears.bandcamp.com
This song is a consequence of police brutality experienced by one of us during the infamous international G8 demo in Genova 2001. "Teargas was everywhere, people were trying to escape in any possible direction while cops were beating whoever was on their way. I was dressed in black and my face was covered and for this reason they had no mercy for me. They, about 6-8 cops, pushed me on the ground between one of their vans and a wall, in this way no one could see the following few minutes of intense violence. I got kicked everywhere and every time I felt their boots hitting me I thought it could have been the one killing me. I survived. Covered in blood, surrounded by other people badly injured I was brought to hospital where for three days I was fed only by tea because doctor suspected some internal damage due to the aggression. At the same time since I was considered as prisoner police came to harass me every day and night, kicking my bed when I was sleeping, insulting me when I was awake. After the hospital it was one week in Alessandria jailhouse where also a lot of political prisoners from the 70s and 80s were and some are still imprisoned. Eventually I got out from jail but I was still charged of rioting, resistance, devastation and so on, for this reason for the following years I had to face a trial from which, in the end, I got out with no consequences due to lack of evidence. All this happened just one week after police visited the Anarchist workshop in La Spezia were I was active and my house too: they were looking for explosives and weapons but it wasn't the first time since it happened already for the first time in 1996 when I turned 18 and I was suspected to be part of a "terrorist anarchist group" active in Italy in those years and again the same happened again in 1999 with police searching my house for explosives as a preventive operation against anarchist terrorism. One year before I was charged for aggression to a police officer during a protest run by students in a squatted school in Carrara. All this not to show any anarchist c.v. but to underline the importance of all the anarchists who arranged benefit gigs to cover all the expenses for the lawyers and all those who showed solidarity giving me strength to face all this shit. I still stand here, doing and sharing my things whereas those blue cops, those judges and jail guards, well, they will be forgotten and no one will ever miss them.

ps stamps back: tiltrecordings.org/ps-stamps-back/
In memory of Barry Horne. For Free and all ELF activists.