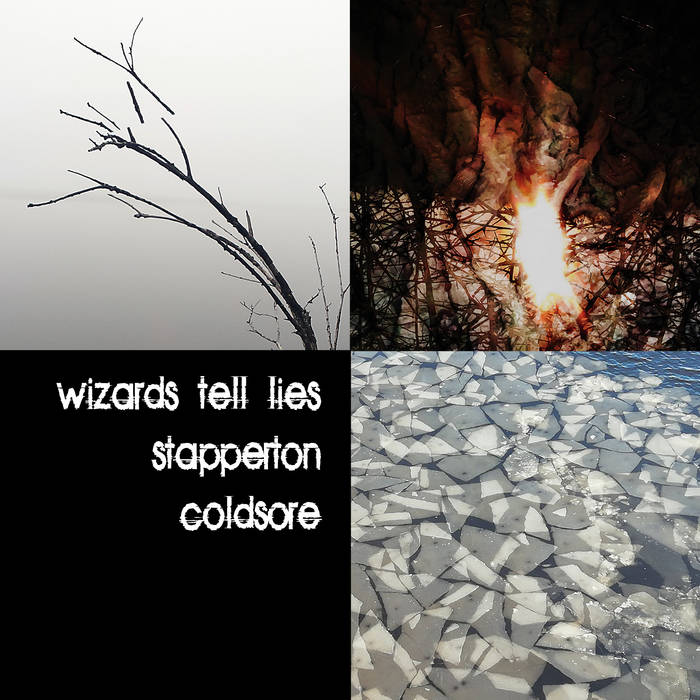 The WIZARDS TELL LIES and the COLDSORE tracks were supposed to be released on the defuct AETHERIC RECORDS (aetheric-records.bandcamp.com). We wish you all the best, A.
To give our siren calls a new chance to be heard, Totes Format shanghaied STAPPERTON into the crew of our drifting raft and then we were three. Hoist the rag!

Many thanks for the prints to Emmi.

So, here’s a three-way split, ‘name your price’ (ie, you’ll pay nothing you tightwad, let’s be frank) release on GRMMSK’s Totstellen label. We start off with WIZARDS TELL LIES. Do they? Hi honey, I just flogged the car for a fairy tree! Really, who sold it to you? Couple of blokeswith beards, floppy hats. Oh, and youtested it, right, cos it looks like a dead spider plant to me? Oh...fuckin’ wizards done me overagain. WTL’s track reminds me a bit of the time I was given a tour of an Estonian boatbuilding facility, in anold Soviet construction complex. Boiler room industrial. That echoey
‘workshop under the railway arches’ thing that early NWW had going on. Even a bit of guitar before it goes all static wave wipeout/grind-your-bones-down-in-the-MOT-pit messy. Nice.STAPPERTON I mainly know for the fact that he’s servedtime in a) Luton b) the post office, which means, like me, he’sguaranteed a spot in Heaven. Haven’t we suffered enough? His 2017 split with Bir on Lurker Bias was oneof my favourite ‘noise’ / ‘no audience’ (God, I hate that term now) releases in living memory. You can still get it on tape for 6 bucks, or leech it for free like the bogroll-snatching ponce your parents disowned. On this track, however, Stappertongoes full shortwave radio on us, joining such luminaries as John “but I thought I pressed ‘record’!” Cage, John “lol, I shagged a corpse”Duncan andPhilip “CO-OPTED BY CUNTS! CO-OPTED BY CUNTS! CO-OPTED BY CUNTS! CO-OPTED BY CUNTS!” Best. Why bother with fancysynths and pricey pads when you can get that bubbling Great White Deathbassand Angus MacLise-style treblydrones off the shortwave spectrumfor free? Radio noiseis cool, and so is this track. COLDSORE’s song starts off like metallic mosquito helicopters exploring a mineshaft, and ends like a thirsty two-headed Chernobyl wolf licking water from a burst pipe in a bombed-out building. In between, there’s a lot of phased ascending/descending swoopswith plenty of reverb ‘n’ clatter. I wouldn’t recommend listening to this on psychotropics, unless you want to feel like a cosmonaut tumbling into the void. Though, however you get your kicks...There’s something a bit United Dairies about this release, which I can’t put my finger on right now, but I may wellbe talking junk.You can get it at the link below and judge for yourself, and maybe throw ‘em some of the money you were gonna squander on sunburst-vinyl Gang Of Four EPson Record Shop Day –oh COVID-19, do we owe you a smidgeon of gratitudefornixingthat, if nothing else! Now please skedaddleoutta hereand leave us be. I know, I know...you all think I’m lying about the Japanese man with the turnip.(MARTIN C, BAT FLU2)