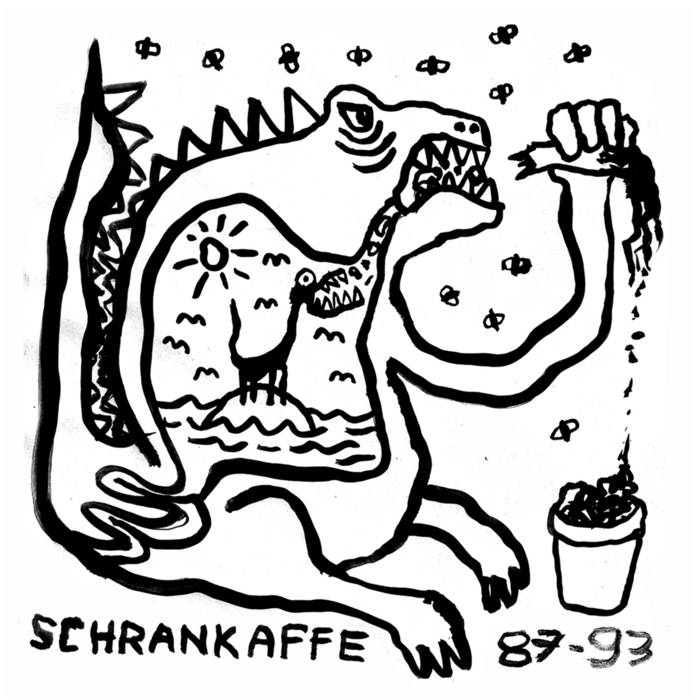 Remastered vinyl re-release of the CD-r version released by TOTES FORMAT, TIM TIM TONTRÄGER, SOZIALISTISCHER PLATTENBAU & ATOMICTITCORPORATION in 2009.
Includes 12" lyric sheet and just like with the CD-r no stickers.
Pressing of 300 copies.

SCHRANKAFFE were an (Ex-DDR) Punkband from Hamburg that existed for 3 gigs. punk's just an experimental set-up was their motto:


Recorded at 'Probebunker Mundsburg' with a handful of shure mics on 4 tracks. Except »Klappe zu« recorded in the rehearsal room at Rote Flora & »Junge Bärte« recorded in the trailerpark Borrowpils (RIP).

"SCHRANKAFFE (which translates to “Cupboard Monkey”!) was an arty punk band out of Hamburg, Germany. If you are unfamiliar with them (as I was), you might assume from the album title (as I did) that they operated in the late ’80s/early ‘90s and this is a collection of their total output from this period. But no! They existed for just three gigs back in 2008, and this is a collection of their total output from that time, initially issued as a CD-R in 2009 and reissued here on vinyl. The title’s significance still escapes me, but the music doesn’t sound unlike it was made in that era. The tunes are mainly mid-fi affairs that skew post-hardcore, but the punker tracks are the most interesting. The guitarist plays feedback-y lead throughout, like he’s assembling songs from variations on the first 30 seconds of BLACK FLAG’s “My War” or “Can’t Decide,” while singer, Itty auf Ex, adds upbeat talk/shout vocals overtop. The drummer will often pitch in vocals for a call-and-response verse or a gang chorus, generally to good effect. I don’t know that I’ll be dipping back into this one, but I found my time with it quite charming. Worth a listen." maximumrocknroll.com/review/mrr-450/87-93-lp/